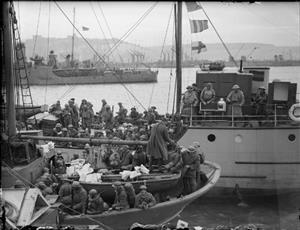 The holiday’s original purpose was to honor the men and women of our armed forces.

Tomorrow marks the 75th anniversary of the Dunkirk evacuation of World War II.
From May 27 to June 4, 1940, Allied forces evacuated nearly 340,000 soldiers from Dunkirk, France, who had been surrounded entirely on land by Nazi soldiers.

The German Luftwaffe dropped leaflets on the Allied armies with a map and the caption: “Look at the map. Your troops are entirely surrounded. Stop fighting! Put down your arms!” Allied soldiers mostly used the leaflets as toilet paper.

To the land- and air-minded Nazis, the sea seemed an impassable barrier. To the British, the sea was a route to safety.

The Allies appealed to anyone with a boat to help rescue the solders from certain death. Fishing boats, pleasure cruisers and commercials vessels joined naval sea craft—800 boats in all—to evacuate Allied troops who were queuing in shoulder-deep in water for hours.

“Dunkirk Spirit” came to represent the solidarity of the British people in times of adversity.

As you begin your summer, remember to thank the men and women of our military who make summer fun possible.

When facing adversity in your business, consider asking for help from everyone on your team.

Do you have “Dunkirk Spirit” in your workplace?