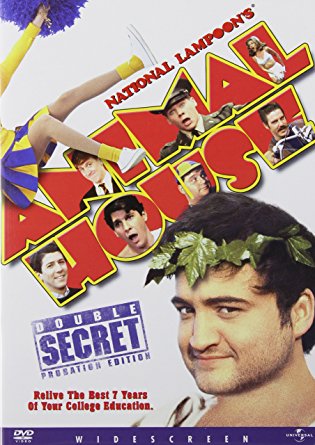 Double Secret Probation in the Workplace

September means “Back to school,” and this year one of America’s most famous college campuses—the fictional Faber College in National Lampoon’s Animal House—turns 40.

The 1978 film chronicles the antics of the misfits at the Delta Tau Chi fraternity led by 28-year-old John Belushi in his first film role.

Today, when the #MeToo movement is calling attention to reprehensible behavior, the raunchy Animal Housewould likely never be greenlighted by a Hollywood producer. That’s because Animal House insults, parodies and mocks everyone with equal irreverence.

The film’s distinctly anti-establishment theme has lost some of its punch now that the crude behavior displayed in the film has made its way to today’s headlines. Some politicians, celebrities and executives make the Delta Tau Chi behavior seem tame.

Animal House was inducted into the U.S. National Film Registry at the Library of Congress in 2001 and ranks No. 36 on the American Film Institute’s list of funniest American movies of all time. If you watched the film today, you’d probably find yourself laughing even though you know you shouldn’t.

Whether you’re appalled or amused by Animal House, the film nevertheless showcases one idea that, unfortunately, is alive in many workplaces: Double secret probation.

Animal House introduced this phrase and applied it to the entire Delta Tau Chi fraternity. In the film, Faber College’s Dean Vernon Wormer is fed up with the Deltas and reveals his plan to revoke their charter to Greg Marmalard, president of the prestigious Omega Theta Pi fraternity:

Dean Wormer: Greg, what is the worst fraternity on this campus?
Marmalard: That would be hard to say, sir. They’re each outstanding in their own way.
Dean Wormer: Cut the horsesh*t, son. I’ve got their disciplinary files right here. Who dropped a whole truckload of fizzies into the swim meet? Who delivered the medical school cadavers to the alumni dinner? Every Halloween, the trees are filled with underwear. Every spring, the toilets explode.
Marmalard: You’re talking about Delta, sir.
Dean Wormer: Of course I’m talking about Delta, you twerp! This year is going to be different. This year we are going to grab the bull by the balls and kick those punks off campus.
Marmalard: What do you intend to do sir? Delta’s already on probation.
Dean Wormer: They are?
Marmalard: Yes, sir.
Dean Wormer: Oh. Then as of this moment, they’re on double secretprobation!
Marmalard: Double secret probation, sir?
Dean Wormer: There is a little-known codicil in the Faber College constitution which gives the dean unlimited power to preserve order in time of campus emergency. Find me a way to revoke Delta’s charter. You live next door. Put Neidermeyer on it. He’s a sneaky little sh*t, just like you, right? [Marmalard nods] The time has come for someone to put their foot down. And that foot is me.

When the Deltas fail an exam after using fake answers planted by the Omegas for the Deltas to steal, Dean Wormer informs the Deltas they are one infraction away from being kicked off campus. The response by the Deltas is classic.

Do the under-performers in your organization know they are at risk? How do they respond?

Eight Question to Ask About Under-Performance
There’s nothing secret about poor performance.

Your top performers are painfully aware of the problem. They’re waiting for you to address it.

In my workshops with company leaders and in my strategic planning and conflict resolution work, I encourage leaders to tackle under-performance head-on, using an approach that explores the situation, develops a solution, sets a deadline and outlines the rewards and penalties associated with the subsequent performance.

Scolding people for not performing is not helpful—it injects fear into the equation.

Fear can be a motivator, but it’s a short-term motivator. Fear does not inspire creative problem-solving. It does not bring out the best in people. It does not encourage commitment. It does not cement loyalty. Fear will drive your best people away.

So rather than scolding, consider a different approach.

There are at least eight questions you should be asking about under-performance. Read 8 Questions to Ask Your Accountability Consultant.

One of these questions is determining whether or not the person knows they’re disappointing you.

Don’t make the same mistake with your under-performers.

Do You Have the Right People in the Room?     |     Michelangelo and the Four Fatal Fears