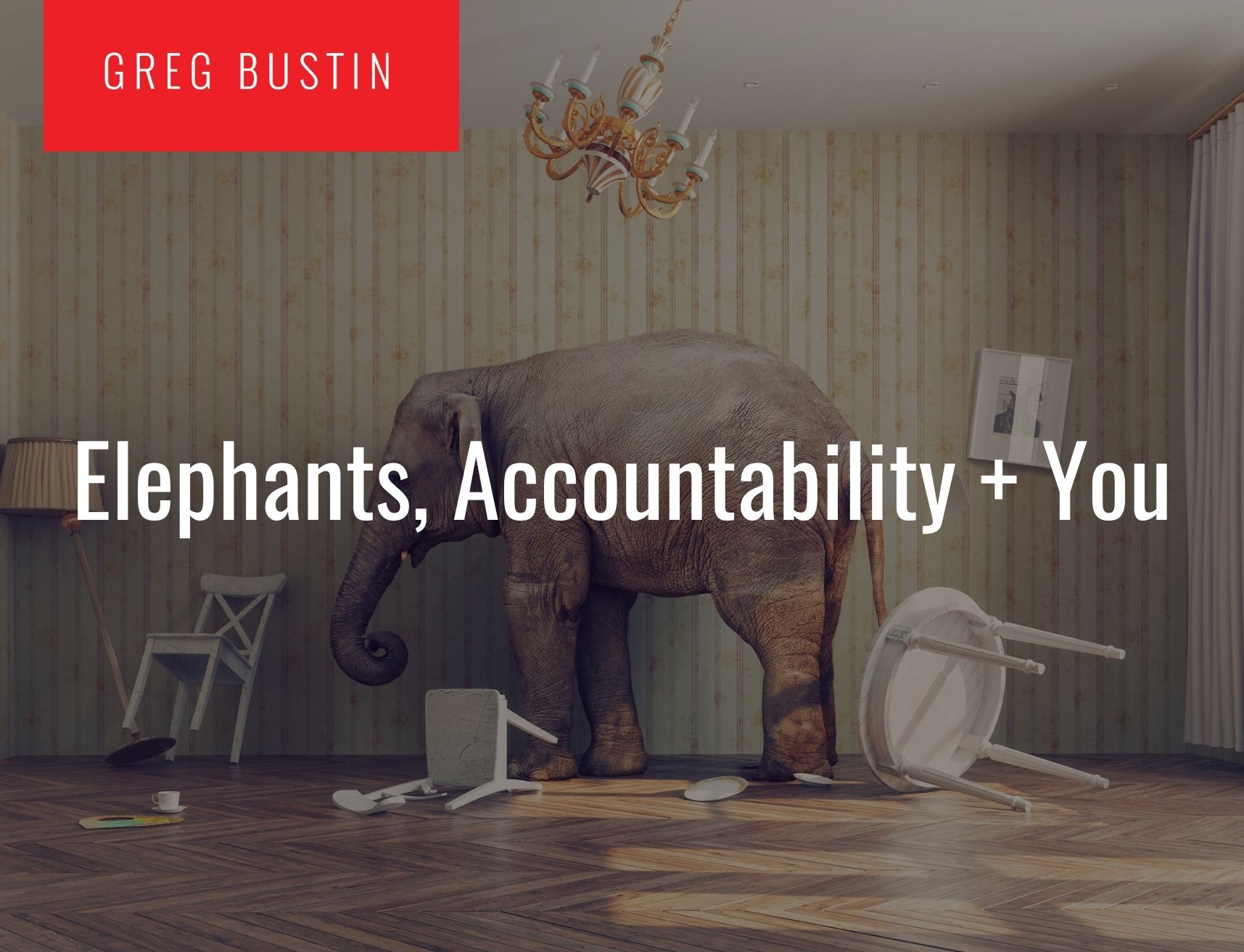 What does everyone see yet doesn’t say?

Even in well-run organizations it’s not uncommon for people to see things that need to be addressed yet remain reluctant to initiate a conversation.

This phenomenon is known as the “elephant in the room.” In hundreds of strategic planning sessions I’ve led, including the half-dozen I’ve led thus far in 2021 for successful companies, there’s always an “elephant.”

There are two likely sources for this phrase, both appearing in the 1800s.

In 1814, Russian poet Ivan Krylov wrote a fable entitled “The Inquisitive Man,” telling of a man who visits a museum and notices all sorts of tiny things yet fails to notice an elephant.

In 1882, Mark Twain wrote a short story entitled “The Stolen White Elephant,” recounting the activities of inept detectives searching for a missing elephant that was under their noses all along.

I use three simple approaches to get sensitive topics out in the open so they can be addressed.

1. Initiate values-based conversations. Organizational expectations are articulated as core values intended to describe ideal behaviors in every aspect of their firm’s operations:

Core values provide opportunities to frame conversations based on gaps—real or perceived—that exist between articulated values (“the talk”) and observable behavior (“the walk”). If one of your firm’s core values is “excellence,” for instance, a conversation with a colleague about a sensitive topic might start like this: “You’ve missed the last two deadlines we agreed on and because one of our core values is ‘excellence,’ I’d like for us to discuss what needs to happen to be sure deadlines are met so we can deliver the ‘excellence’ both we and our customers expect.” This approach to accountability begins as coaching (not scolding) to create awareness of the issue then offer the other person an opportunity to respond, solve, and ultimately own their solution.

2. Survey planning session participants. Leaders who engage me to facilitate planning sessions find it’s helpful for me to call the participants in advance. Doing so stimulates thinking among the participants before they step into the room while also providing an opportunity to raise sensitive issues confidentially with an objective outside party. My experience is that while most people I survey assure me they’ve already shared with their colleagues the information they’re sharing with me, the reality is they haven’t really done so or they’ve sugarcoated the issue so thoroughly the real problem is either hidden or minimized. My pre-planning surveys require no preparation and are about 15 minutes in length. Everyone understands that our conversation is 100% confidential, though I make it clear I’ll share with the larger group patterns I observe. Two of my standard questions are, “What’s the most important thing we need to accomplish to make this planning session successful?” and “What’s the one decision you’d make if you were in charge?” I don’t start with those questions, but people’s responses will usually tell me everything I need to know about the elephants in the room.

3. Read the room. I work from an agenda in order to deliver desired outcomes, but there’s often a point where I sense people are holding back. When that happens, I distribute blank index cards and ask everyone to write down their response to this question: “What’s the one thing we’re not talking about that we need to be talking about?” I don’t want their names on their cards and I don’t read the cards out loud. Usually I announce there’s one “elephant” that’s been written on most of the cards, then I challenge the participants to name it. Most of the time, smart leaders can name the elephant on the first try. Then we’re off to the races—focused on addressing the issue versus wondering if anyone’s got the courage to actually say out loud what most people are already thinking.

The Six Blind Men and the Elephant

Talking about the elephant is only the first step.

People’s perceptions about the nature of the elephant—its origin, size, its importance, and possible solutions—can differ.

At a planning session a few weeks ago, a group of 20 company leaders were getting focused on one of the elephants they had identified. Yet the view of this issue was different, depending how each leader viewed it from their perspective. The conversation that ensued prompted one executive to send me this poem from John Godfrey Saxe:

It was six men of Indostan, to learning much inclined,
who went to see the elephant (Though all of them were blind),
that each by observation, might satisfy his mind.

The first approached the elephant, and, happening to fall,
against his broad and sturdy side, at once began to bawl:
“God bless me! but the elephant, is nothing but a wall!”

The second feeling of the tusk, cried: “Ho! what have we here,
so very round and smooth and sharp? To me tis mighty clear,
this wonder of an elephant, is very like a spear!”

The third approached the animal, and, happening to take,
the squirming trunk within his hands, “I see,” quoth he,
the elephant is very like a snake!”

The fourth reached out his eager hand, and felt about the knee:
“What most this wondrous beast is like, is mighty plain,” quoth he;
“Tis clear enough the elephant is very like a tree.”

The fifth, who chanced to touch the ear, Said; “E’en the blindest man
can tell what this resembles most; Deny the fact who can,
This marvel of an elephant, is very like a fan!”

The sixth no sooner had begun, about the beast to grope,
than, seizing on the swinging tail, that fell within his scope,
“I see,” quothe he, “the elephant is very like a rope!”

And so these men of Indostan, disputed loud and long,
each in his own opinion, exceeding stiff and strong,
Though each was partly in the right, and all were in the wrong!

So, oft in theologic wars, the disputants, I ween,
tread on in utter ignorance, of what each other mean,
and prate about the elephant, not one of them has seen!

Short of the plan itself, the single greatest benefit of the planning process is building and strengthening trust among the leaders who will be accountable for executing the plan so that difficult issues—real and imagined—can be discussed, solved and owned by all.

If trust is absent from the planning session, elephants will stalk your organization and wreak havoc with your plans, your results and your culture.