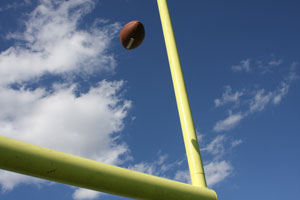 Professional football teams have just two games to play in their regular season.

A few teams will advance to the playoffs.  Most will think back on another season squandered.

Inside Sports studied the scores of all games played from 2003 to 2013.  The study found that 26 percent of all of games were decided by a margin of six points or less.  Think about it: One in four games could have been won simply by scoring one more touchdown than the opposing team.

With competition for customers more intense than ever, there’s a razor-thin margin for winning and losing.

Are you and your team settling for field goals?

What’s the biggest – and perhaps hardest – change your business must make heading into 2014 to out-perform your competition?