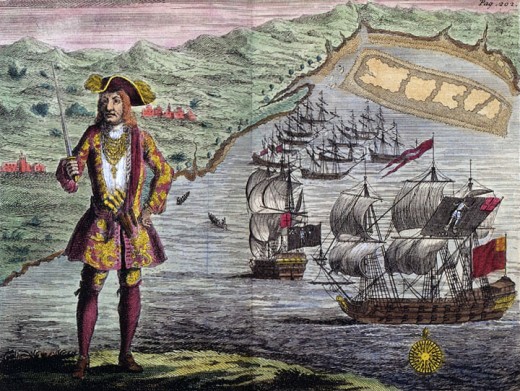 How Good People Go Bad: Any Pirates Aboard Your Ship?

Navigating a Business World Full of Pirates and Traitors

How do good people go bad?

For Bartholomew Roberts, the route from honest sailor to Black Bart, the most successful pirate of them all can be traced over a six-week period that began with his capture by pirates off the coast of Africa on 6 June 1719.

Every organization has pirates. Workplace pirates don’t wield cutlasses, but they are exceedingly dangerous. They are the employees who deliver results but don’t play by the rules. They may get the job done, but it’s at the expense of those around them. So it’s important you know how to handle the pirates on board your ship.

Pirates have been around as long as the seas have been sailed for commercial gain, with some accounts of piracy dating to the 14th century BC.

The Golden Age of Piracy is the period most of us think of when we think of pirates. This period spans the 1650s to the 1730s, and pirates like Blackbeard, William Kidd and Henry Morgan gained fame and fortune for their buccaneering exploits as they plundered their way through the Caribbean, the eastern Pacific, the Indian Ocean and the Red Sea.

But these pirates pale in comparison to the success of the pirate Bartholomew Roberts would become.

Roberts’ life started innocently in South Wales. His family consisted of devoutly religious farmers and, though they were considered middle class, they didn’t have much.

During Roberts’ childhood, tales of Welsh pirates like John Callis and fantasies of buried treasure fired the imagination of a boy trapped in a village with few prospects for a better life.

Though the life of a sailor in the late 1600s involved backbreaking work where the food was sickening, sleep was hard to come by and the ship’s hierarchy could be enforced brutally, it was a life that promised young Roberts escape from the monotony of his current existence.

So the 13-year-old Roberts set off on a six-mile journey from his home to the coast and joined a ship’s crew. He soon was exposed to lessons of human nature as well as those taught by the sea.

As he grew into a man, his “large and stout” frame, his “inventive mind,” and his disciplined temperament honed by his religious upbringing made Roberts a natural leader. Within months of leaving home, Roberts had become an accomplished seaman.

Books examining Roberts’ life—A General History of the Robberies and Murders of the Most Notorious Pirates, written in 1724 by Captain Charles Johnson (a likely nom de plume), and If a Pirate I Must Be… by Richard Sanders—characterize Roberts as “a sober, somewhat solitary man” who shunned alcohol for tea and had little taste for violence. Roberts’ key attributes were intelligence and discipline.

Two of the hardest questions any of us must answer for ourselves are, “Who am I?” and “What do I want?” Roberts didn’t yet know who he was, but he knew for certain he wanted a new life.

What’s the biggest thing that’s missing in my life? What steps must I take to put myself on a better path? What obstacles are in my way? What’s my first step?

Little is known of Robert’s early sailing years other than he toiled as a third mate on merchant and slaver ships, distinguished himself as a navigator, and, somewhere along the way, changed his named from John Roberts to Bartholomew Roberts.

Roberts was never called Black Bart in his lifetime. It was a name that stuck after fellow Welshman I.D. Hooson’s poem described the pirate’s “black” complexion.

Nor did the test of Roberts’ character occur the day of his capture. Pirates, always in need of officers, had dragged Roberts aboard unwillingly on 6 June 1719.

At the time of his capture, Roberts had begun to realize that, despite his skills, the navy offered him no path to a captaincy. At 37, he was 10 years older than most of the men. Meanwhile, repulsed though he was by pirates’ undisciplined life, his six weeks of captivity allowed him to glimpse a better future for himself, illegal though it was. “In an honest service,” Roberts later said, “there is thin commons [resources], low wages and hard labour; in this [piracy, there is] pleasure and ease, liberty and power.”

When the captain of Roberts’ ship died during a failed raid, the pirates voted for new leadership. Roberts’ “gradual seduction” to a pirate’s way of life was completed that second week in July 1719 when he accepted command of the Royal James.

Roberts “changed his principles,” wrote Johnson, because “power…was the attraction.”

“I have dipped my hands in muddy water,” said Roberts upon his acceptance, “and if a pirate I must be, ‘tis better being a commander than a common man.”

Having grown up poor, Roberts understood pirates’ hatred of anyone prosperous. “Piracy, in their minds, was a justified means of obtaining those benefits an unfair world had denied them.”

But upon being named captain, Roberts knew more discipline was required.

Say what you will about pirates, they had rules, known as Articles, that governed life aboard a ship and that everyone was required to sign. One of Roberts’ first acts was to create a new set of Articles—11 in all.

Only those dedicated to a life of piracy would choose to sign such a document. They were signing their own death warrant.

Yet they also were signing up to follow the most successful pirate who ever sailed the high seas.

By the time he was killed by British sailors three years after becoming a pirate, Roberts had captured about 400 ships, “a figure which dwarfs that of any of his contemporaries,” writes Sanders. “He had travelled around 35,000 miles…and he’d held together a larger crew for a longer period of time than any other pirate captain.”

A pirate’s success hinged on a monarch’s willingness to tolerate him until he had “by degrees grown so powerful,” writes Johnson, “as to put [governments] to the expense of a great deal of blood and treasure before he was suppressed.”

Who are the employees producing results at the expense of our core values? What’s my plan for addressing this behavior?

Failure to be clear about the behavior you expect means things will end badly.

The Summer of 1776: Planning the Future of an Independent Nation     |     Lighten Up! What Mental Baggage is Weighing You Down?