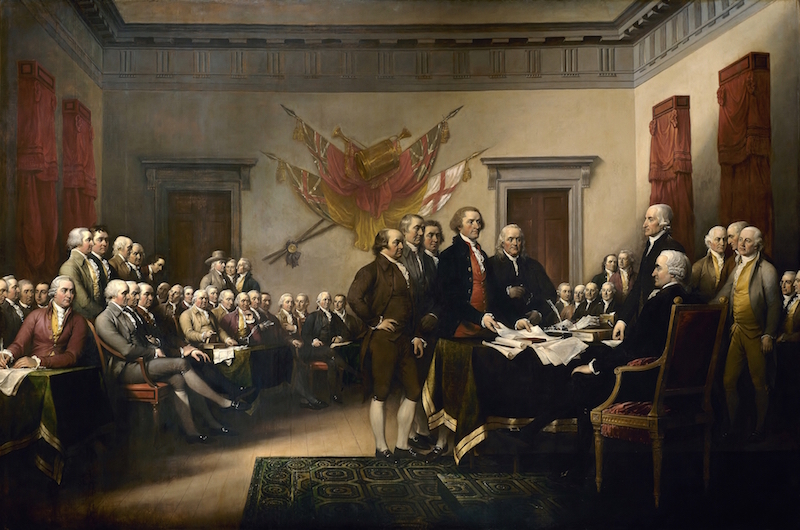 The Summer of 1776: Planning the Future of an Independent Nation

The first battles of the American Revolutionary War were fought at Lexington and Concord on 19 April 1775.

The Battle of Yorktown that culminated on 19 October 1781 with Lieutenant General Charles Cornwallis’ surrender prompted the British government to negotiate the war’s conclusion.

But the summer of 1776 has been called American history’s “crescendo moment.”

John Adams found Paine “better at tearing down than building up,” but he fanned the flames Paine ignited. By late March Adams began accepting requests from North Carolina, Pennsylvania and New Jersey to draft memoranda guiding these colonies as they modified their respective governments in preparation for independence.

George Washington, 12 months into a war waged with an amateur army, had lost patience with the moderates in congress who were, in his view, “still feeding themselves on the dainty food of reconciliation.”

It only was a matter of time: A split with Great Britain was coming.

But in May 1776, the 56 delegates of the second Continental Congress were anything but aligned. There were three factions: those who wanted to restore conditions with Great Britain to pre-1763 conditions; those who believed Parliament had overstepped its governance; and those who favored independence.

Yet with British cannon thundering nearby (or perhaps because of it), the delegates in Philadelphia found ways of reaching consensus to make monumental decisions over the next three weeks with lightning-quick speed, including approving a proposal for new state constitutions and a 218-word preamble Adams added that was a de facto declaration of independence.

They next began debating Richard Henry Lee’s resolution “that these United Colonies are, and of right ought to be, free and independent States.”

The 56 delegates knew they were in the spotlight and they sensed their decisions would be judged by posterity: “We are in the very midst of a revolution,” wrote Adams, “the most complete, unexpected and remarkable of any in the history of nations.”

A lot of these historical records have been preserved for record-keeping as well as to let the coming generations know of the battle their forefathers fought to keep their freedom. History buffs and those interested in reading up more about these events as well as the people involved in them, could find more help on websites like Genealogy Bank.

If we were starting over, what would we do differently?

Thomas Jefferson returned to Philadelphia on May 14 after celebrating his 33rd birthday in April at Monticello.

Jefferson was the second youngest delegate. Only fellow Virginian James Madison-the “Father of the Constitution” and America’s fourth president-was younger at 25.

Jefferson was a poor public speaker and an introvert-highly intelligent, aloof and shy. But his pen did the talking, and a pamphlet he wrote two years earlier caught the eye and heart of many.

So when Lee’s resolution on Friday, June 7, sparked a heated debate that showed no signs of cooling after John Hancock called congress to order the following Monday, moderates succeeded in delaying a vote until July 1 to allow the middle colonies to confer with their state legislatures.

To avoid lost time should the vote for independence pass, congress immediately appointed the Committee of Five consisting of Jefferson, Adams, Ben Franklin, Roger Sherman and Robert Livingston with instructions to begin preparing a document.

Given his reputation and prowess as a storyteller with Poor Richard’s Almanac, Franklin was the clear favorite to prepare the draft. He declined, saying, “I have made a rule…to avoid becoming a draughtsman of papers to be reviewed by a public body.”

Adams had a sharp legal mind but already chaired 23 different committees, including the Board of War and Ordnance where he served as General George Washington’s civilian boss. Adams also recognized his radical position and hard-charging personality would be a distraction when the document was discussed.

Next up: Jefferson. He was a Virginian, which was important because of Virginia’s economic clout in America and, therefore, its clout in congress. Jefferson was less controversial than Adams. And, as Adams noted, Jefferson could “write ten times better” than the others. Jefferson would have preferred to return home to revise Virginia’s constitution, but it was not to be.

The choice of Jefferson to draft the Declaration of Independence would be, as Joseph Ellis wrote, “one of the most consequential accidents in American history.”

Where am I getting in the way? Have I invited our best people (regardless of age, tenure or position) to help us plan our future?

In its first meeting on June 11, the Committee of Five agreed on the document’s framework then turned over the writing to Jefferson, who cloistered himself in a Philadelphia boarding house to begin work.

Working on a laptop desk of his own invention, Jefferson thought, wrote and rewrote the draft, using elegiac language to frame the argument for independence with potent ideas (he changed the word “subjects” in his draft to “citizens”).

Meanwhile, in the days following Adams’ May 12 resolution, state legislatures were notifying congress of their support for independence. Jefferson shared his draft with Franklin and Adams on June 21, and it was here the phrase “We hold these truths to be sacred and undeniable” was changed to “self-evident.”

The draft was presented to congress on Friday, 28 June 1776 as the British fleet carrying 9,000 redcoats was sighted off the Long Island coast.

Over the next three days, congress made 85 revisions, focusing on the grievances outlined in the document and all but ignoring Jefferson’s inspiring opening. With the exception of the King James version of the Bible, writes Christopher Hutchins in Thomas Jefferson: Author of America, “there is no other example in history…in which great words and concepts have been fused into prosaic prose by the banal process of a committee.”

The signers of the Declaration of Independence deliberately skirted the difficult issues of slavery, women’s rights and civil rights. Adams’ intent during the debates was to keep everyone’s eyes on the prize: independence. Other issues, Adams argued in what many consider the most significant speech of his distinguished career, would have to wait.

Of the hundreds of decisions made that summer, the crucial decision came on July 2 with a unanimous vote for independence.

Now Washington had to win the war. Careening from one defeat to another, he experienced an epiphany: He didn’t need to win. He could achieve America’s goal for independence by not losing.

As the summer of 1776 closed, Washington executed a miraculous retreat from New York on August 31. He and his army would live to fight another day.

They would be fighting a war against the world’s mightiest military and economic power to win life, liberty and the pursuit of happiness.

What must we be willing to say, do and set aside in order to achieve our most important goal?

Intuition vs. Regret: How the Beatles Climbed to the Top of the Charts     |     How Good People Go Bad: Any Pirates Aboard Your Ship?