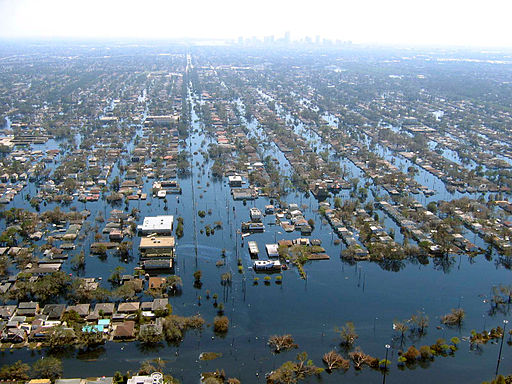 Ten years ago today Tropical Storm Katrina emerged from the Bahamas to reach landfall in Florida before moving back into the Gulf of Mexico and intensifying into a Category 5 hurricane.

The next day, Hurricane Katrina picked up where it left off, moving westward toward Louisiana on a path of annihilation.
By the time Katrina had blown itself out, the hurricane had destroyed $108 billion in property, cost 1,833 people their lives, and left 80% of New Orleans underwater. Katrina swamped beachfront property in Mississippi, leaving its watery legacy of loss as far inland as 12 miles from the shore.

Any way you look at it, Katrina was the costliest natural disaster in the history of the United States.

What did we learn?

The truthful answer is, “Time will tell.”

That’s because the events of Sept. 11 should have been a wake-up call in terms of America’s preparedness for disasters. Katrina showed we were not prepared for the chaos this hurricane unleashed.

Ten years after Katrina, $14.5 billion in fortifications have been installed as part of a $50 billion master plan. For people along the Gulf of Mexico, this plan represents preparedness, an expectation that lessons have been learned, and the hope a similar disaster can be averted.

And there are a handful of reminders we all can heed.

Be prepared. It’s better to have a plan and not need it, than to need a plan and not have one. The 6,000-page federal report issued in 2006 called the flood-control measures in and around New Orleans “a system in name only.” Scientists estimate more than half of New Orleans is below sea level. So while levees and flood walls hold back some water, everyone in Louisiana knows the state loses the equivalent of a football field every hour as it sinks into the sea.

Despite the threat, the good times still roll in the Crescent City.

The lesson: Don’t have a disaster recovery plan? Build one. Have one already? Test it. Don’t have an emergency survival kit? Invest in one, like this earthquake kit and others available on 72hours.

Speed and decisiveness are crucial. As the water rose in 2005, lawlessness erupted. Leaders at all levels failed to act in a timely manner. There was no clear chain of command. Officials later admitted the National Guard should have been mobilized immediately to maintain law and order and to help wrestle order from chaos. Richard Clarke, who served Presidents Clinton and Bush, said plans and money do little “if you don’t have people at the top who know how to make these decisions quickly.”

The lesson: Make sure everyone knows who is calling the shots, and expect the unexpected.

Communicate, communicate, communicate. In war, during natural disasters, and in other moments of crisis, the ability to communicate clearly is a prized commodity, yet it is often the first casualty. So you would think that four years after 9/11, local, state and federal officials would’ve learned something about communication. No dice. According to the Federal Communications Commission, Katrina destroyed three million customer lines, obliterated more than 1,000 cell sites, and wiped out 37 of 41 radio stations in Louisiana, Mississippi and Alabama. Credible information also was a casualty. When trouble hits, leaders must preempt, minimize or mitigate rumors and misinformation that will swirl around the crisis by providing reliable information. It’s better to say, “I don’t know” than to pretend you do when you don’t.

Character trumps everything. My brother-in-law David Jumper served as a Marine in Viet Nam, and he says, “Adversity is certain. Misery is optional.” For people who were living on the edge, Katrina pushed many of them off. Other people lost loved ones, their homes and their jobs then gritted their teeth, redoubled their efforts, and worked to restore their lives.

The lesson: Adversity doesn’t build character; it reveals it.

Don’t waste a crisis. Katrina’s receding flood waters left behind loss and death and filth. But the flooding prompted enterprising business leaders to take a fresh look at themselves. With occupancy low after Katrina, hotel executives in New Orleans had the choice to retreat or re-invest. Many leaders took the opportunity to expand and modernize their facilities. Ten years later, the city’s visitor’s bureau says there are nearly 39,000 hotel rooms – 10,000 more than in 2005. Hotel occupancy is up sharply.

The lesson: Good things can come out of bad experiences, but it’s a choice.

Life is about learning from our experiences and then making choices.

How will you respond when disaster strikes?