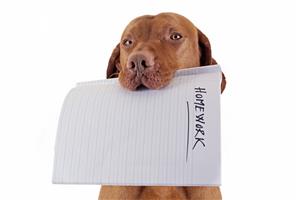 It’s back to school season.

Whether you’re a student or a business executive, the back-to-school vibe is noticeable in classrooms, cubicles and conference rooms as calendars fill more quickly, cooler weather energizes behavior, and new assignments adopt an increasing sense of urgency.

The period between Labor Day and Thanksgiving is my busiest time of year as I work with leadership teams in strategic planning sessions to help colleagues agree on priorities, responsibilities, and action items for the coming year and beyond.

Last year in Forbes Leadership Forum, I discussed why most company strategic plans fail. One reason is lack of accountability.

Part of what makes accountability difficult is that when you work with smart people and things don’t get done well or on time, you often are handed excuses.

“My dog ate my homework” is an excuse that sprang from a 1905 anecdote about a minister temporarily filling in for another minister.

At the time, William ApMadoc, a contributor to the Welsh journal The Cambrian, indicated the initial punchline had more to do with brevity than an excuse for non-performance.

In ApMadoc’s telling, a visiting minister asked a clerk how his sermon had been received, and, in particular, whether it had been long enough. Upon hearing from the clerk the length was sufficient, the minister replied that just before the service his dog had eaten some of the paper on which the sermon was written. “Well,” replied the clerk, who felt his regular preacher’s sermons could be shorter, “couldn’t you give our vicar a pup from your dog?”

It was not until 1965 in Bel Kaufman’s best-selling novel Up the Down Staircase that students blamed their failure to complete an assignment on their dogs.

Since then, “My dog ate my homework” has become code in and out of classrooms for a lame excuse.

In the workplace, time, talent and treasure (money) are the three commodities every organization has in common, and here’s what lack of accountability sounds like:

I put out fires all day, so there’s no time to work on my stuff.
Our deadlines are unrealistic.
The deadline was unclear.
I spend my time doing my boss’s work.
I spend my time doing work my staff should be doing.
I spend my time on tactical—not strategic—work.
We can’t always get it right the first time but we can make time to fix it.
There’s no sense of urgency around here.
I ran out of time.
His performance will improve with time.

Talent
We don’t have the right people.
We don’t have enough people.
We don’t have enough of the right people.
The people on our team can’t think for themselves.
He let me down.
These people don’t report to me, so their work is not my fault.
I didn’t know I was allowed to make that decision.
I didn’t understand the assignment.
It wasn’t my job.
The changes we made are preventing me from getting things done.
My team won’t like me if I confront their performance issues.
People here are not team players.
That person is a family member and the rules don’t apply to her.
We can’t keep our best people so we are not very effective.

We underprice what we sell so we can’t staff properly.
We can’t agree on priorities so our budgets are spread too thin.
Our customers beat us up on price so we can’t charge more.
We are constantly being asked to do more with less, including more work for the same salary.
Money is tight so we can’t hire the people we need.

It’s a vicious circle, and the excuses are infinite.

Talk is cheap so we often buy it. When we do, accountability suffers.

Moving from Excuses to Accountability

As leaders, we get the behavior we tolerate. So when it comes to holding people accountable, we are often our own worst enemy.

That was my story.

Despite achieving record financial results year over year, the firm I founded and led could have accomplished more. There would have been more fun and less drama if I knew then what I know now about accountability.

At the time, I accepted excuses that sounded logical even when I knew better. I allowed emotions to cloud my decision making. I delayed having a conversation with my underperforming partner because it was easier to avoid a difficult conversation than having one. Instead of practicing accountability, I practiced avoidance.

By the time I asked my partner to leave, I had learned three valuable lessons:

The day after we separated, my partner called to say he appre­ciated the straightforward, professional, and respectful manner in which I had handled our final meeting.

Even though these com­ments reflected well on his gracious acceptance of tough news, they reminded me that everyone feels better when accountability issues are addressed.

Excuses are substitutes for effort.

As a leader, be careful you’re not creating excuses for yourself over a difficult decision that is yours alone to make.