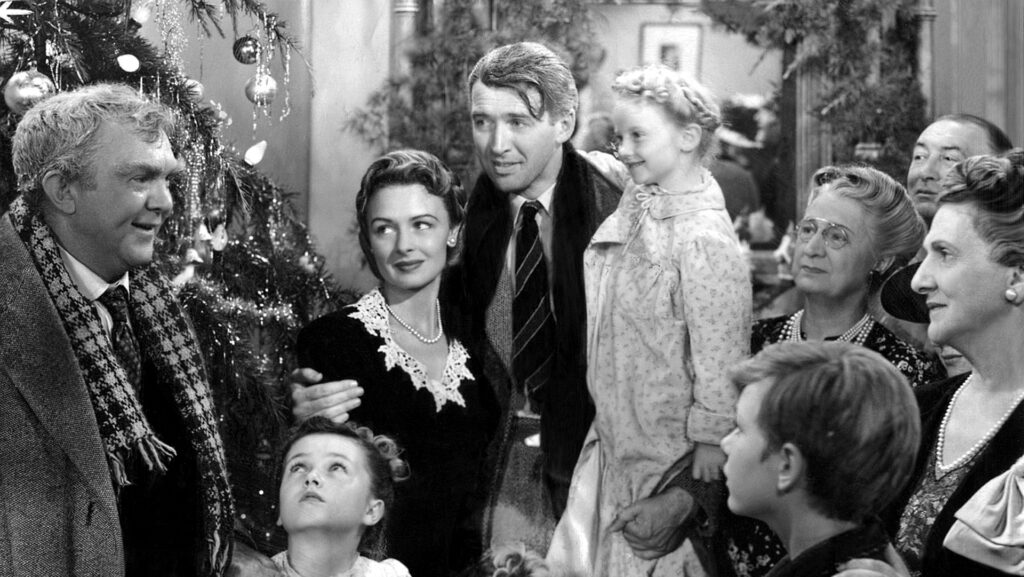 “I made mistakes in drama. I thought drama was when actors cried. But drama is when the audience cries.” – Frank Capra

Frank Capra was born in Bisacquino, Sicily, and came to America in 1903 to write a new story for himself.

In time, it was stories written by others that Capra directed that made him one of America’s most influential film directors winning three Oscars.

In a six-year period, Capra completed It happened One Night, You Can’t Take It with You. And Mr. Smith Goes to Washington, receiving nominations for Best Director on each and winning the award for the first two. Following the attack on Pear Harbor, Capra, forty-four, enlisted and was put to work producing propaganda films, including Why We Fight series and Prelude to War, considered masterpieces of war documentaries and winning Capra two more Academy Awards.

But it was his 1946 film It’s a Wonderful Life that has become a Christmas season classic and is considered one of the best one hundred American films ever made.

The story was conceived by historian Philip Van Doren Stern on February 12, 1938.

Stern began telling the story he called “The Greatest Gift,” but no one wanted to buy the rights. “By this time,” Stern remembers, “I had become fond of the story that nobody wanted.” He packaged the story as a twenty-four-page booklet and sent it to friends at Christmas. A booklet found its way to RKO pictures producer David Hempstead, who showed it to actor Cary Grant. RKO bought the film rights in 1944 for $10,000. Despite assigning writers to develop a screenplay, no scripts satisfied RKO.

What’s your story?  Would you believe it if someone else were telling it?  Would it inspire you?

When Capra read the RKO scrips, he judged that none “had the spirit of the original” and he hired writers to begin a new adaption.

Actor Jimmy Stewart starred in Capra’s You Can’t take It with You and Mr. Smith Goes to Washington, and Capra wanted Stewart to play George Bailey. As Capra finished summarizing the story to Stewart, Capra said, “This story doesn’t tell very well, does it?” to which Stewart replied, “Frank, if you want to do a movie about me committing suicide, with an angel with no wings named Clarence, I’m your boy.” In truth, Stewart was grateful. “Frank really saved my career,” said Stewart, who had been away from Hollywood for four-and-a-half years serving in the military during World War II. Stewart turned thirty-four during the second month of filming.

By now, the storyline of It’s a Wonderful Life is familiar: On Christmas Eve in 1945, prayers are heard in heaven for George Bailey of Bedford Falls, New York. In a series of flashbacks covering twenty-six years, we see George regularly putting others’ interests ahead of his own. George delays his college plans to run Bailey Building and Loan after his father dies. George helps others achieve their dreams while his remain unfulfilled.

As George and Mary prepare to depart on their overseas honeymoon, there’s a run on the bank and all of the customers demand their deposits in cash. George and Mary quell the panic by using their honeymoon money to satisfy the depositors.

As we return to Christmas Eve in 1945, Uncle Billy heads to Henry Potter’s bank to deposit $8,000 of the Bailey Building and Loan’s cash. When Billy accidentally places the money in Potter’s newspaper, panic ensues as bankruptcy looms.

George turns to Potter for a loan, but Potter turns him down, smirking, “You’re worth more dead than alive.”

With what regularity do you put others’ interests ahead of your own?

At his lowest moment, George Bailey’s nature is to help others.

Angel Clarence Odbody comes to Earth and jumps off the bridge where George is standing, prompting George to jump in and save Clarence.

As they’re drying out, Clarence tells George he’s his guardian angel. “You look about like the kind of angel I’d get,” George mutters, then says “I wish I’d never been born.” Clarence grants his wish.

Clarence and George head into town. George discovers he’s not recognized by anyone because he’s never existed. The town and the people have changed for the worse because George was missing in their lives.

“Strange, isn’t it?” Clarence asks George. “Each man’s life touches so many other lives. When he isn’t around, he leaves an awful hole, doesn’t he?”

How many lives have you truly touched? What stories will they tell about you when you’re gone?

Leaders make their mark on the world in ways that can be far-reaching and hugely significant yet invisible for months or years.

In the movie’s final scene, George miraculously returns to Christmas Eve. As midnight approaches, George’s brother Harry gives him a toast: “To George, the richest man in town!”