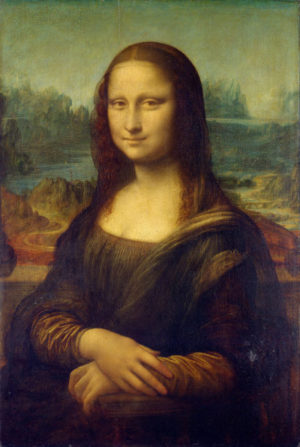 500 years ago this month, Cardinal Luigi d’Aragono and his entourage set off on a “Grand Tour” that would lead them to the world’s most famous painting.

By October 1517, the Cardinal had arranged an audience with Leonard da Vinci in what is now Clos Lucé near Amboise, France. During this visit, da Vinci’s masterpiece—the Mona Lisa—was shown for the first time.

What was it about this painting that caused a sensation at the time, and how did it become the world’s most widely known image?

What clues did Leonardo da Vinci leave for today’s business leaders striving to make their company a masterpiece?

Mystery has contributed to the Mona Lisa’s fame. It is unclear who commissioned the pivotal work.

Is the painting a portrait of Lisa, the wife of Francesco del Giocondo, a wealthy silk merchant?

Or is the enigmatic woman a mistress of Giuliano de Medici?

Whatever theory you accept, it’s clear that by 1500, da Vinci’s reputation was secured. The Mona Lisa is his crowning achievement in a life marked by breakthroughs in sculpting, science, architecture, music, mathematics, engineering, writing, anatomy, astronomy, botany, geology, and cartography.

Around 1475, when Leonardo was 23 years old, his work as the pupil of Andrea del Verrocchio on the Baptism of Christ prompted people to take note of this young painter.

Young Leonardo’s insatiably curious mind, acute eye for detail, and his dexterity with pencil and brush were clearly evident in his work. Commissions followed and he soon found favor with Italy’s powerful Medici family.

Da Vinci’s interest in anatomy contributed to his talent as a sculptor. His 1490 drawing of the Vitruvian Man is one of the world’s most reproduced icons.

Da Vinci’s passion for facts, figures and logic separated him from his contemporaries. His mathematical, engineering and drawing skills gained him employment as a military architect, engineer and map-maker (a rare skill).

As he continued to paint, da Vinci’s reputation grew, being described as a “Divine” painter. His fresco The Last Supper, completed in 1495, is the world’s single-most reproduced religious image.

While da Vinci is usually considered along with Michelangelo and Raphael as the three giants of the Italian Renaissance, Leonardo was 23 years old when Michelangelo was born and 31 when Raphael was born. Da Vinci paved the way.

I once shared a conference stage with Dan Pink, author of Drive and To Sell is Human. Pink described the essence of selling as identifying and owning a single word. For Apple, it’s “think,” for Google, it’s “search.” For Leonardo da Vinci, it’s two words: “Renaissance Man.”

What one word summarizes our reputation? What one word do we want to own in the minds of our employees, customers and partners?

Discover more about the importance of Reputation here.

What Makes Your Masterpiece Special?

The first written reference to the Mona Lisa appears in the diary of Antonio de’ Beatis, who was among Cardinal Luigi’s entourage.

On this day, visitors were shown three paintings by da Vinci: one of the Madonna and Child in the lap of St. Anne, one of a young St. John the Baptist, and a third painting which turned out to be da Vinci’s masterpiece, the Mona Lisa.

The visitors were struck immediately by the Mona Lisa’s beauty and also by its originality: No subject had ever been painted with a smile.

Da Vinci used a shadowing technique at the corners of his subject’s lips as well as at the corners of her eyes, producing an extremely lifelike and beguiling appearance. The portrait conveys the illusion the observer is standing before this enigmatic woman.

Da Vinci also created a background with aerial views and a landscape, which was muted in contrast to the vibrancy of the subject’s face and hands. His unique technique showed no visible brushstrokes.

The Mona Lisa was at once beautiful and original.

Da Vinci’s inventive mind was comfortable experimenting with new ideas. What’s our view of taking a risk and trying something new?

Read more about the importance of Risk-taking here

Assigning Value to Your Masterpiece

Upon da Vinci’s death on 2 May 1519, the artist’s long-time assistant Gian Giacomo Caprotti da Oreno, better known as Salaì, inherited the work and sold it to France’s King Francis I for 4,000 gold crowns.

Though commissioned in Italy, this masterpiece today is the property of the French Republic and hangs in the Louvre. When I viewed it, I was surprised by its small size: 20.87 inches wide (53 centimeters) by 30.32 inch high (77 centimeters).

Its value is estimated at $800 million.

The Mona Lisa is a beautiful painting. Da Vinci’s reputation contributes to its value. There is a direct relationship between da Vinci’s reputation and the painting’s continued success and prominence as a significant piece of art, history, and culture. If someone else had painted it, would it still be as valuable?

What is the value of the masterpiece I’m creating? How much money do I require to be happy in retirement? Does my spouse or partner agree?

Find answers to the financial questions that shape your future here.

Do we have what it takes to create a Mona Lisa?

About the Author:  Greg Bustin advises some of the world’s most admired companies and leaders, and he’s dedicated a career to working with CEOs and the leadership teams of hundreds of companies in a range of industries. Through his strategic planning facilitation, keynote speaking, workshops and leadership development work with peer advisory boards, Bustin helps CEOs and other key executives maximize their individual performance and, in the process, the performance of their organizations. Bustin is the author of four leadership books, including Accountability: The Key to Driving a High-Performance Culture (McGraw-Hill).

5 Questions to Ask About Money     |     Leadership Lessons from D-Day