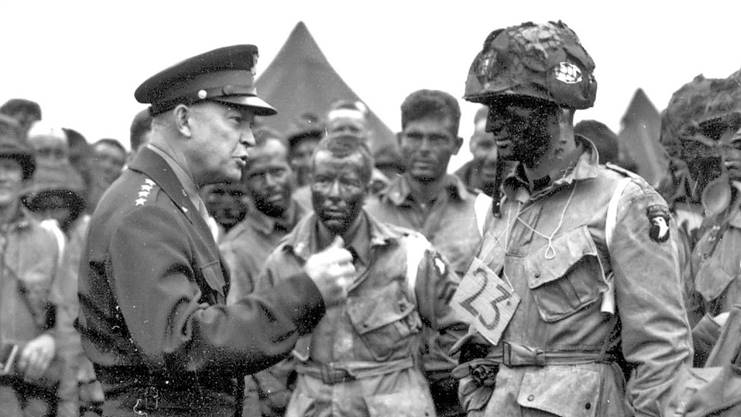 The worst weather in 20 years was wreaking havoc with months of planning, the lives of hundreds of thousands of military personnel, the world’s destiny, and the nerves of commanders on both sides of the English Channel.

About the same time, Gen. Dwight D. Eisenhower wrote his son, “No other war in history has so definitely lined up the forces of arbitrary oppression and dictatorship against those of human rights and individual liberty.”

The stakes were astronomical. World War II’s outcome hung in the balance.

Eisenhower led nearly three million Allied troops. Now on 5 June 1944, inside Southwick House, in a meeting called for 9:30 p.m., Ike faced the free world’s biggest decision. Only he could make the decision.

He postponed the Allied invasion the day before due to bad weather.

Now he had to decide again.

So much was uncertain. How could Ike be sure his decision would be the right one?

That the Allied invasion of Europe was imminent was no secret to the Germans.

The secret was when and where.

Invasion planning began in May 1943, months before Eisenhower was named Supreme Commander.

Ike liked to quote an old Army maxim: Plans are worthless, but planning is everything, recognizing nothing is “going to happen the way you are planning it.”

Yet he pointed out, “This operation is planned as a victory, and that’s the way it’s going to be. We’re throwing everything we have into it; and we’re going to make it a success.”

“Everything we have” meant the Allied preparation was unprecedented with more men, more ships, more planes, more equipment and materiel than had ever been assembled for a single assault. Thousands of questions had been asked, answered and scrutinized. By June 1944, the colossal preparation included:

Tonight, the decision to launch ships and mobilize planes sending thousands of men to France rested solely on Eisenhower’s shoulders, and one report said Ike appeared to be “bowed down with worry…as though each of the four stars on either shoulder weighed a ton.”

Despite meticulous planning examining every possible situation, the world’s biggest invasion came down to one thing that could not be planned: the weather.

How thoroughly do we prepare to remove as much guesswork as possible from our decision-making?

Paratroopers needed moonlight. The army needed calm tides to land its men and inwardly blowing winds to clear smoke from shelling. Everyone wanted long daylight hours, plus another three days of clear weather after D-Day to expedite arrivals of men and supplies.

Just three months of 1944 met these requirements. On May 17, Ike decided only three days in June — the 5th, 6th and 7th — were suitable, and the previous night he called off the invasion scheduled for June 5. He had two days left.

Another postponement risked discovery by the Germans, enabling them to answer “when” — now! — and “where” — Normandy, not the Pas de Calais as Hitler and others thought.

At exactly 9:30 p.m., chief meteorologist Group Captain James Martin Stagg opened the briefing. He and his team had no satellites, no weather radar, no computer modeling to rely on — but they were good and Ike trusted them. They were asked to predict the timing, track, strength and distance of storms. Stagg announced “some rapid and unexpected developments” that added up to a break in the weather.

Ike polled his commanders. It was still a huge gamble, yet all said, “Go.”

“It was now up to Ike,” writes Cornelius Ryan in The Longest Day. “The moment had come when only he could make the decision.” One general noted “the isolation and loneliness” of Ike as “he sat, hands clasped before him, looking down at the table.” Some said two minutes passed, others as many as five.

Then Eisenhower looked up and said slowly, “I am quite positive we must give the order. I don’t like it, but there it is.”

The four cornerstones of trust are shared values, clarity of purpose, skills mastery, and proven performance. Where in your organization are these cornerstones the shakiest?

A Tale of Two Leaders

Meanwhile, German leaders were fighting two wars: One with the Allies; the other with Hitler’s erratic decision-making.

Hitler and most German officers believed the Allies would not attack in weather this bad. They were wrong.

Hitler had ordered a military exercise in Rennes, a two-hour drive from Normandy’s beaches, so there were no senior officers on the front.

The Luftwaffe had only 183 fighter planes in France, and 124 were transferred from the coast the day before the invasion. And 16,242 seasoned Panzer troops were on alert 25 miles southeast of Caen, but could be mobilized only by Hitler’s personal order.

Hitler retired for the night as the first Allied paratroopers were dropping into France, fast asleep when the invasion began. Hitler’s aide Admiral Karl Jesko von Puttkamer, found initial reports “extremely vague” and “feared that if I woke him at this time he might start one of his endless nervous scenes which often led to the wildest decisions.”

It was the beginning of the end of Hitler’s Third Reich.

How is my behavior as a leader preventing me from getting the best information, the honest input, and the wisest counsel from those I count on most?

Ike and the Allies won their Great Crusade. What tough decisions must you make to win yours?

The Mona Lisa: How Reputation Influences Success     |     Intuition vs. Regret: How the Beatles Climbed to the Top of the Charts