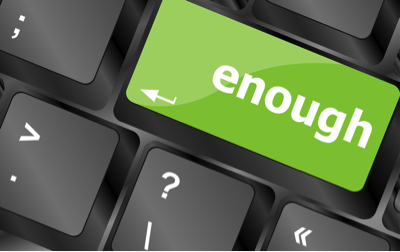 What is Poor Performance Costing You?

When Will You Decide Enough is Enough?

In an earlier post, 8 Questions to Ask About Accountability, we tackled the topic of underperformance and took a fresh look at confronting it.

For many, the idea of confrontation is negative so we delay having the conversation with an underperformer that we know we need to have.

The origin of the word confront is two Latin words-con (origi­nally com), meaning “together,” and frontem, meaning “forehead.” Confront is a neutral word meaning “to stand in front of.”

When you confront an issue, you are simply bringing that issue front and center to be addressed.

Here’s a better way to think about confrontation: It’s the search for the truth.

As you search for the truth about underperformance, you’ll need to get answers to several questions. You will need to know: What is this performance costing us? and How do we fix it?

Armed with those answers, you’ll then be able to answer this question: When will I decide enough is enough?

With football season underway, let’s return to the 2012 season and the labor dispute between the National Football League and the NFL Referees Association. This was the season of the replacement refs.

When both sides failed to reach a consensus on a new contract before the start of the 2012 season, the NFL hired replacement refs to officiate games.

During the first two weeks of play, the replacement refs bungled calls and delayed two games for up to six minutes each as they consulted rule books and reviewed plays on instant replay.

While none of these mishaps altered the outcome of games, one sportswriter said the replacement refs were “an embarrassment to Roger Goodell and the NFL owners, who are allowing underqualified and unprepared people to tarnish a great league.”

By Week 3, mistakes by the replacement refs had mushroomed to affect six different games.

The mistake widely believed to have ended the lockout came in the last game of Week 3 on the last play of the nationally televised game between the Green Bay Packers and the Seattle Seahawks. In this play, Seattle quarterback Russell Wilson threw a Hail Mary pass to receiver Golden Tate that the replacement refs ruled was a touchdown. Replays showed that Tate had shoved a defender with both hands, which the NLF later acknowledged should have drawn an offensive pass interference call that would have negated the Seattle touchdown and resulted in a Green Bay victory. This may have made some people playing Japan’s best online casinos happy, as they may have placed a bet on such an outcome, but it is still a contentious moment for the game.

Such was the cost of these mistakes-in dollars, in reputation, in player safety, in the standings of two playoff-contending teams-that two days after this game the NFL and the referees reached a new agreement, ending the dispute. Hopefully with new rulings in place, should anyone wish to continue betting on NFL games using websites similar to https://ats.io or others, these mistakes won’t happen in the future that could disgruntle fans and betters alike. If it does, the world of NFL betting may suffer a loss, with scorned punters exploring different avenues of gambling like those available on Best-casino.net.

And this is not a wild take, because NFL Commissioner Roger Goodell acknowledged that the Seattle-Green Bay game “may have pushed the parties further along in negotiations.”

When is Enough Enough for You?

When people outside our organization-suppliers, customers and contract laborers-disappoint us, how many chances do they get before we give up on them?

Based on my own experience, only one or two chances.

How many chances do we give those inside our organization to disappoint us?

Data I’ve collected shows that leaders give their colleagues dozens of chances to break promises, miss deadlines and generally screw up.

When you think about the cost of poor performance in your organization, have you considered these costs?

How much is this performance costing you?

How bad must things get before you decide enough is enough?

How much underperformance are you willing to tolerate before making the changes you know you need to make?

What Are the 12 Questions You Should Ask About Strategic Planning?     |     Discover How The Delta Companies Achieved EPIC Growth