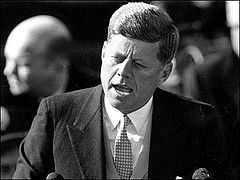 President Kennedy had been fatally wounded in Dallas, Texas.

From the time John Kennedy took office to that fateful day in November 1963, JFK was in office just two years, 10 months and three days.

1,036 days earlier, in an inauguration speech delivered on a bitterly cold January day, President Kennedy painted a bright new future. Not just for Americans, but for every citizen of the world.

“The world is very different now,” the 43 year-old president began.

When he had finished, Kennedy had pledged the “loyalty of faithful friends,” requested that America’s adversaries “begin anew the quest for peace,” and promised that “the energy, the faith, the devotion which we bring to this endeavor will light our country and all who serve it – and the glow from that fire can truly light the world.”

With Speeches, Less Can Mean More

A reminder that less can be more.

In a speech filled with big ideas and fueled by crisp writing, there are many notable quotes.

The most famous, of course, is President Kennedy’s concluding words.

The mark of an exceptional leader is to challenge, question and inspire. Kennedy did all of this by posing America’s most famous question that really wasn’t a question.

How would you respond?