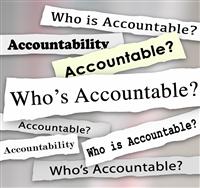 And the Loser Is…

Leaders throughout the world voted in December for the “Best and Worst in Accountability” of 2014 in the Bustin & Co. Accountability Appraisal.

Voters completing the survey had an opportunity to win one of 10 signed copies of Greg Bustin’s book “Accountability,” named by Soundview as one of the best business books of 2014.  I’d like to thank the nearly 500 people who logged on to vote. Those winning a copy of my book have been notified.

Voters were given this litmus test for accountability: Either we can count on someone who gives us their word, or we cannot.

The results are in.

Most Accountable for 2014
First, the good news.

We count on leaders – in government, academia, sports, and business – to make tough decisions.

So we admire and trust a leader who’s willing to make an unpopular decision if we’re convinced their judgment is guided by a moral compass, a compassionate heart and a thoughtful view of what’s best for the long-term greater good of those they serve.

CVS Caremark CEO Larry Merlo was selected as the “most accountable” person in 2014 over four other strong candidates. Alan Mulally placed second for his turnaround of Ford Motor Company.

Merlo was chosen “most accountable” for his February 2014 decision announcing that CVS Caremark would stop selling tobacco products in October 2014 because of “the inconsistency of selling tobacco in a place where healthcare is delivered.” At the time, Merlo noted there were sales of $2 billion at stake.

Least Accountable for 2014
People at the top who make watered-down decisions, who make no decision at all, or who say one thing and then another abdicate their responsibility. In so doing, they not only fail to fix the problem but lose our respect.

That’s why voters selected former U.S. government secretary Eric Shinseki the “least accountable” person of 2014 for his shoddy management of the Department of Veterans Affairs.

In 2014, the VA increased the average wait time to 114 days, and its botched paperwork, outmoded systems and ineffective bureaucracy resulted in confirmed deaths of at least 40 veterans.

In a difficult year for the U.S. government, Kathleen Sebelius, former health and human services secretary, placed second for the problematic launch of healthcare.gov.

Last week, Marilyn Tavenner, head of the U.S. Centers for Medicare and Medicaid Services, announced she plans to step down at the end of February. Though Tavenner didn’t say why she was leaving, she acknowledged last November that her agency made a mistake and “inadvertently counted twice” the number of people – nearly 400,000 people – enrolled under Obamacare.

Lack of Accountability Hurts Everyone
Based on hundreds of engagements and data I have collected over a six-year period from more than 4,500 CEOs and their key executives from around the world, the facts are clear: Most organizations are not as effective as they could be at getting things done.

And lack of accountability is a big reason why; often it’s the reason why.

When a person fails to deliver on a promise, everyone loses.

Accountability is Affection, not Punishment
To give yourself, your colleagues and your organization the best chance to succeed, remember that accountability is not punishment . It’s a support system for winners.

Then follow these steps to create and sustain an accountable organization:

Clear expectations must be established. When your purpose, expec¬tations, and rewards are crystal clear, your employees will embrace accountability as a way to become even more suc¬cessful. The opposite is also true: If you are not clear about everything—vision, values, objectives, strategy, rewards, and, yes, penalties—the likelihood of achieving your vision is slim.

Bad news does not improve with age. As soon as you see a problem, it’s best to address it immediately. Failure to speak frankly with the person about his or her performance means nothing will change.

It’s not personal. Yes, you’re talking with a person, but leave emotions and opinions behind. Stick to the facts, set a plan to get performance back on track, and communicate spe¬cific consequences for underperformance. If under-performers require termination, do it professionally and allow them their dignity.