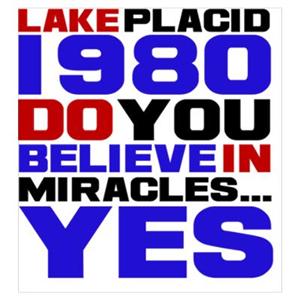 Next week is the 35th anniversary of the United States Olympic hockey team’s defeat of the Soviet Union hockey team.

It was an unlikely victory that came be known as the Miracle on Ice.
First, the game showed that teamwork trumps talent. The Soviets fielded a group of players who were practically professionals. Team USA was a group of amateurs, yet coach Herb Brooks forged a team whose play was tough, relentless and cohesive.This game, played in Lake Placid New York, on February 22, 1980, reminds us of two powerful concepts that leaders can apply in sports, business and the not-for-profit world.

Second, Brooks inspired his players, many of whom were bitter rivals in college, to play for something bigger than themselves. In the locker room before the game with the Soviets, Brooks told them, “You were born to be a player. You were meant to be here. This moment is yours.”

How’s the teamwork on your team? Are you giving your players something to cheer for?

Forget Resolutions. Focus on Celebrations.     |     Change: Are You Happy or Sad?