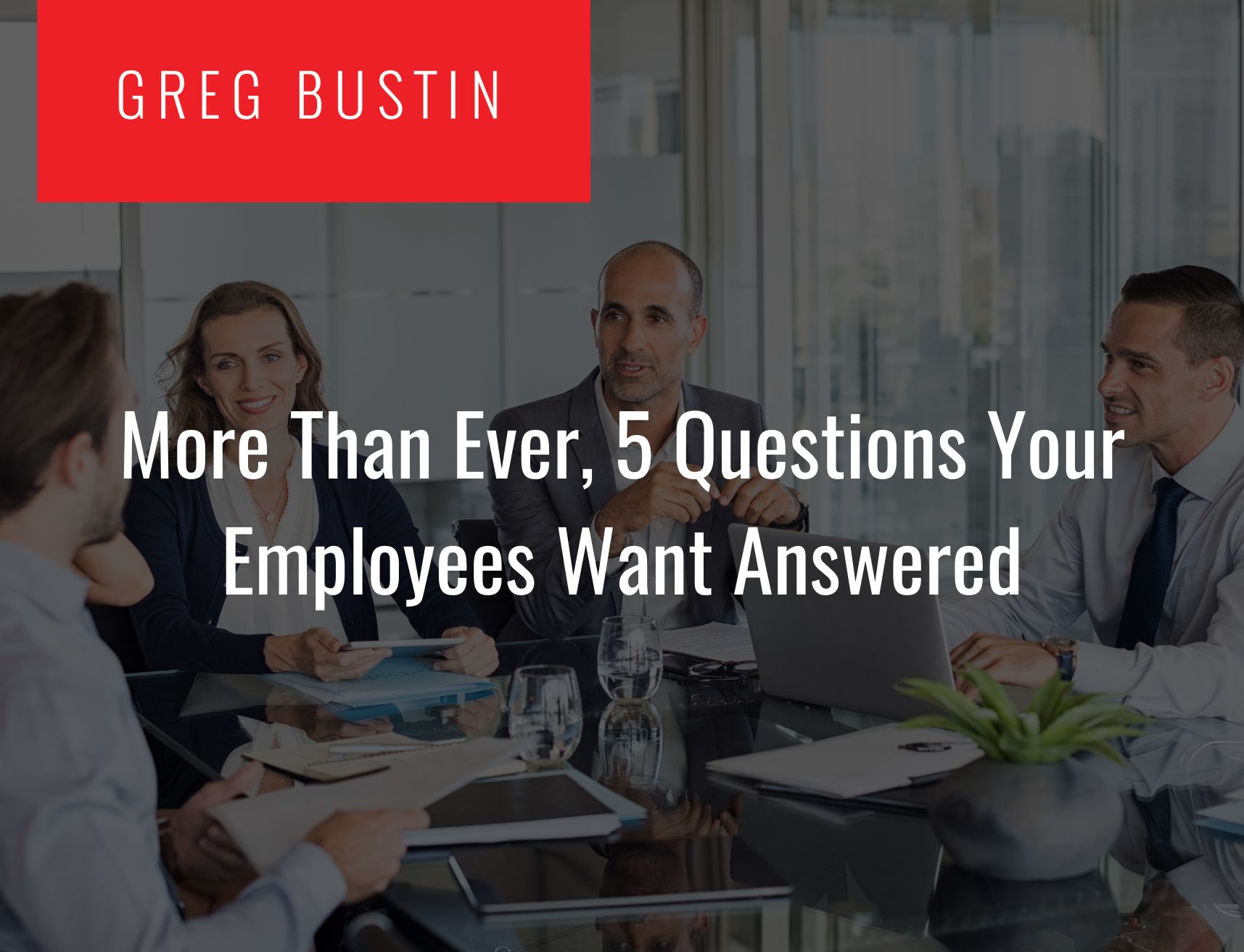 More Than Ever, 5 Questions Your Employees Want Answered

This material was first published in November 2018. Due to popular response, this material has been edited and is being reposted.

To paraphrase Eleanor Roosevelt, a person is like a tea bag: You can’t tell how strong they are until they’re placed in hot water.

Today’s leaders may not necessarily believe they’re in hot water, but most would agree that navigating employee matters has rarely been tougher.

And sustaining a culture of growth, compassion and accountability matters more to your employees than ever before.

Ninety years ago – in 1932 – America’s fear of prolonged hardship and impending ruin caused by the Great Depression propelled Franklin D. Roosevelt into the White House in a landslide victory over Herbert Hoover.

Soon after FDR’s inauguration, Americans discovered the election had brought them a bonus in the form of the president’s wife, Eleanor.

In an era when few woman worked outside the home, Eleanor Roosevelt pioneered many causes we take for granted today. She was the first First Lady to conduct regular press conferences, host her own radio show and speak at a national party convention.

She pressed the United States to join and support the United Nations and became its first delegate. She served as the first chair of the UN Commission on Human Rights and oversaw the drafting of the Universal Declaration of Human Rights.

By the time of her death in November 1962 at age 78, Eleanor Roosevelt was regarded as “one of the most esteemed women in the world.”

Where Can I Go for Help?

In 1932, there was a four-month gap between Election Day and Inauguration Day. During the Great Depression, fear flooded into this void.

The day before FDR’s inauguration, banks in thirty-two of the country’s forty-eight states had closed. Deposits evaporated. Money was useless—there was nothing to buy.

Fifteen million Americans were out of work—one out of every three people. Capital investment dropped from $10 billion in 1929 to $1 billion in 1932. Farm income had plummeted 60 percent.

Worldwide gross domestic product (GDP) fell by 15 percent. By comparison, worldwide GDP during the 2008–2009 Great Recession fell by less than one percent.

Today’s uncertainty is different from the fear and uncertainty that gripped the country during the Depression. Yet people are still searching for answers and—today as then—seeking help.

Eleanor Roosevelt heard them and responded.

In the August 1933 issue of Woman’s Home Companion in an article entitled “I Want You to Write Me,” Eleanor Roosevelt wrote that through this new column, she was establishing “a clearing house, a discussion room, for the millions of men, women and young people who read the Companion every month.”

The purpose of this column was to “help [people] solve the problems which are forever rising in our personal, family and community lives, not only with my ideas but with the ideas of others.”

We are passing through a time which perhaps presents to us more serious difficulties than the days immediately after the war, but my own experience has been that all times have their own problems. Times of great material prosperity bring their own spiritual problems, for our characters are apt to suffer more in such periods than in times when the narrowed circumstances of life bring out our sturdier qualities; so whatever happens to us in our lives, we find questions constantly recurring that we would gladly discuss with some friend. Yet it is hard to find just the friend we should like to talk to. Often it is easier to write to someone whom we do not expect ever to see. We can say things which we cannot say to the average individual we meet in our daily lives.

Eleanor Roosevelt’s column started an avalanche of correspondence as more than 300,000 letters and postcards found their way to the White House from September through December 31, 1933.

The response was unprecedented, and, incredibly, each piece of correspondence was referred to the appropriate government agency for action and Eleanor Roosevelt’s staff replied to each writer.

Ask: To whom do people in your organization turn for help?

The answers you get speak volumes about your organization’s culture.

I facilitate about 10 strategic planning sessions each year and speak to leaders at conferences and workshops about 50 times per year.

It never ceases to amaze me that people will confide in someone they’ve just met, telling me their greatest concerns about what’s happening in their organizations.

These conversations are not occurring because I have some magnetic appeal. Rather, they are occurring simply because I ask, I listen and I promise to do what I can to help begin to address their issue.

Here are the five questions every employee wants answered:

Action: Start the New Year by creating a confidential survey and asking your employees these five simple questions.

Share the results. Then make sure you act on them.

Eleanor Roosevelt provided hope and help for a fearful nation.

Her simple leadership lesson: She asked people to tell her the help they needed. She listened. She took action based on what she heard.

Leadership is not always so simple. Sometimes it is.

Accountability: The Greatest Ability     |     Rate your Leadership against Lincoln