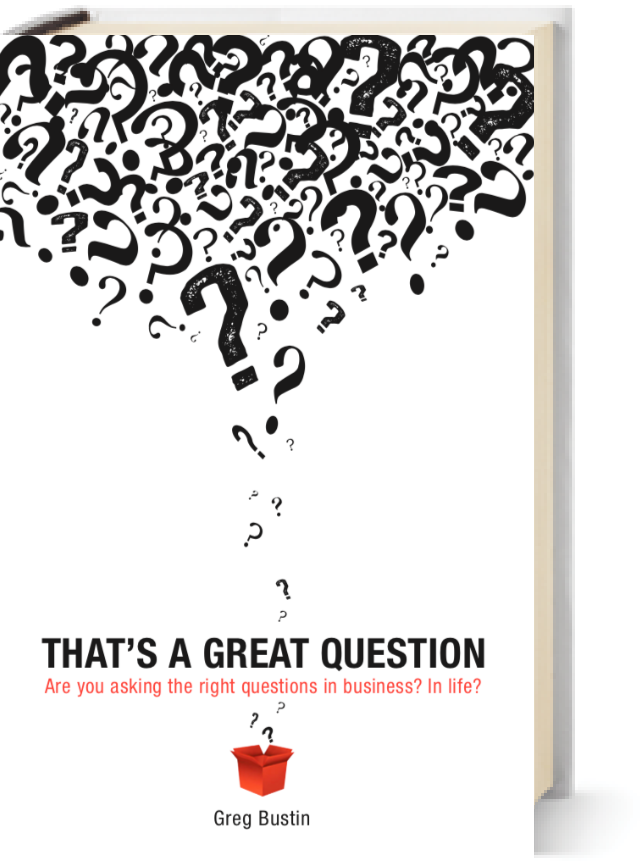 The following is an excerpt from That’s a Great Question, Greg Bustin’s latest must-read book for leaders and CEOs who are interested in understanding what matters most to take action, increase effectiveness and improve business performance.
——————–
“That’s a great question,” the CEO said.
The two of us were sitting in his office and we were in the middle of our monthly coaching session.
I’d just asked him a question he hadn’t expected.

It was a stiletto moment. I’d pierced the heart of the CEO’s issue, and now he was feeling a bit queasy.

Over time, I’ve learned to appreciate the enormous power questions wield. Early in my career, I needed to be able to answer questions for my supervisors and clients. Later, when I was running an office and, eventually, my own firm, I saw the value a single question brought to thorny issues, strained relationships and difficult decisions.

At the end of this year, I will have led more than 150 strategic planning sessions for companies of all sizes in dozens of different industries, run nearly 200 workshops throughout the U.S., Canada and Europe, and conducted more than 1,600 executive coaching sessions with senior executives of Fortune 500 companies and owners of small and mid-sized companies. Questions have formed the backbone of all of these engagements.

I believe the “great question” comment from those on the receiving end of a pointed question is a reflexive response. The response can be offered as a compliment to the inquisitor in the hope of getting off the hook. Sometimes, it’s uttered to buy time and establish permission for not answering quickly, crisply or convincingly. And occasionally, it’s in recognition that a worthy challenge has been laid down around an issue that previously was not considered or conveniently ignored.

Whatever the reason, I hear that “great question” phrase frequently.

The question I’d posed to the CEO may not have been one of the truly great questions of all time, but it was nevertheless an insightful question because it caused him to confront from a different perspective a tough issue he’d been wrestling with for some time.

So there we were – the CEO and me – in his office. He was thinking. I was waiting for his response.

After about 30 seconds of silence that felt more like 30 minutes, the CEO said the words I was waiting to hear.

“I hadn’t really looked at it from that perspective,” he said. He then made a decision and told me the action he would take based on having considered the issue from a fresh perspective.

That’s the power of a great question. It provides an opportunity to ponder issues that may have been taken for granted, never considered or purposefully ignored. It allows us to think differently about those issues. And then prompts us to dig deeper to expose – within ourselves and within others – what’s most meaningful.

There are more than 500 questions covering 18 topics in That’s a Great Question that, year after year, represent the most compelling areas the successful people I work with examine regularly.

Each question represents an opportunity for you to gain insight, unlock potential and move toward a desired result.

Proactive questions matter because they:

High-performing leaders create an environment where questions – especially tough questions – are welcomed, asked and answered before decisions are made and after results are produced.

The book also examines how to ask great questions. And it addresses words that often trigger undesirable responses.

“It would be hard to imagine a better person to write about the art of asking impactful questions than Greg Bustin,” writes Rafael Pastor, Chairman of the Board and Chief Executive Officer of Vistage International. “You too can learn the art and value of question-asking from a master practitioner.”

You won’t find every single question you’ll need on life’s journey. You will, however, find some of the most penetrating questions I’ve asked to help very successful people get more of what they want out of life.